Extended "the Grand Room" on the 2nd floor

Changed the name into "Beitou Museum"

the Foundation was established

the 100-year anniversary of the Museum The elegant wooden architecture of Beitou Museum was started to be constructed in 1921; at that time, it was the most luxurious hot springs hotel, named "Kazan Hotel" in Beitou region. Nowadays, it is the most representative Japanese purely-wooden two-storey construction in Taiwan. The floor area of the Museum is about 800 Ping (around 2640㎡), and it locates in the placid mountainside in Beitou. Surrounded by green garden, there stands the only left Japanese two-storey main house built by Hinoki (Chinese cypress or juniper) in Taiwan and an annex called Taoran House. In 1935, Taoran House was completed and was utilized as the annex for welcoming visitors and guests. The extension of the Grand Room, completed in 1939, on the 2nd floor of the Museum, was used as a delicate banquet hall.

In 1949, the constructions were sold by Ms. Yoshita to "the Committee of Reconstruction and Safekeeping Enterprise" of the Nationalist (KMT) Government. After that, the old hotel was distributed to the Ministry of Foreign Affairs as accommodations. In 1966, it was auctioned to a non-governmental institution; because its unique architectural features were maintained, the elegant environments had attracted many films to be shot here in the old hotel. Due to this, the structures also received an alternative name of "Gu-Yue (means ‘Old Moon Manor’) villa" because of a movie with the same name. As a result, the hotel once became an important movie-shooting spot and had taken part in the prosperity and decline of the so-called "Taiwan Hollywood" in Beitou region. Until 1983, the structure which had experienced long and splendid times turned to be rented by the Foundation. We originally used the name "Taiwan Folk Art and Antique House" as the starting point and arranged the exhibited objects with Taiwanese early-period folk crafts and indigenous artifacts. It was formally open on October 27 1984 for the public to visit. In 1987, the name was changed into "Beitou Museum." The Museum holds the collection up to 5000 pieces in total, which includes around 4000 pieces of Taiwanese folk crafts and about 1000 objects of indigenous artifacts. All of the collections are abundant and delicate.

In 1995, the "Fu Lu Cultural and Educational Foundation" was established, and the name was changed into "Fu Lu Cultural Foundation" in 2007. Although experiencing several times of passing-on and name-changing, Beitou Museum is still beautiful as it originally was. In order to arouse public attention to the conservation of cultural heritage, Taipei City Government listed Beitou Museum as municipal private historical site in 1998, and now it is the private museum administrated by Fu Lu Culture Foundation. In 2014 and 2019, the Museum was rewarded with the annual assessment rewarding project of historical house management and maintenance by the Bureau of Cultural Heritage, Ministry of Culture (BOCH). The Museum was also awarded "the Reward of Friendly Architecture – the Category of Exhibition Field" by the Ministry of the Interior in 2015.

Since 2002, the Foundation has invited the professionals in relevant fields of historical house and its conservation, spending a period of 5 years proceeding renovation based on the original ancient techniques. Finally, the Museum was reopened in the beginning of 2008. Beitou Museum, which begins the journey of a brand new life, has already become the new multiple-functioned cultural & creative site that combines historical houses, Taiwanese and Japanese cultural performances and the special exhibitions of Taiwan indigenous peoples’ art. Our service is a multiple operation which consists of: artifact exhibitions, artistic and cultural performances, rent for holding great banquets, creative Japanese Kaiseki cuisine and various cultural experiencing courses, including the experiencing of Sado (Japanese tea ceremony) and Wakashi (Japanese desserts), and the exhibiting and selling of Taiwanese cultural creative artifacts. We are moving and will move forwards to become the platform of the cultural and creative industry in Taiwan. 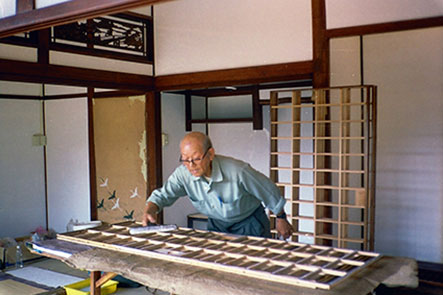 2002 The renovation of the historical houses. Mr. Huan-Hai Zeng proceeds the work of pasting paper door. 2008 The scene of the reopening Beitou Museum